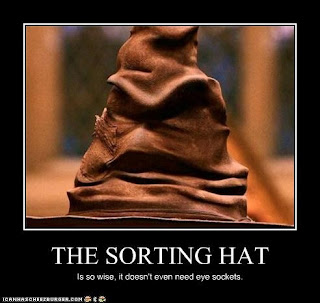 My oldest son has one that the Major brought from DisneyWorld for him but it's not nearly big enough. This is a fairly large house and with four of us in it, we have too much stuff. My goal over the next couple of weeks is to pare it down much more. From furniture to pageant clothes, an iphone and old wedding ring, to a myriad of toys and collectibles I've never shown, I want these things GONE. Out of sight. Sold. Vanished. Most of the stuff in the house seems to be the Major's, minor packrat that he is. Only thing is, we USE everything we have. The six tubs of party goods will definitely need some readjusting. I can't bear to be without our Christmas stuff because the boys will be spending the holiday with their dad over the next three years. But I would still like to decorate our house on the island to feel like home until they leave.

And why can't there be a Sorting Hat to work thru feelings? As we work custody out with their dad, this is my hopeful plan. It's a readjustment for everyone. I can only hope the changes are helping my kids be more flexible and accepting, opening their minds to all the possibility that world travel opportunities have in store. There are fantastic resources out there and I'm implementing as many as I can to help them thru the transition. Military Kids Connect has a little avatar so younger kids can keep track of their travels with a stamp, coping skills for older kids and even Military 101 for newcomers to learn the lingo. I've been Googling like crazy finding sites for making moving easier. Frankly, some of these sites would probably help me too!

How about a Sorting Hat to go thru the bajillion things that have to be done before the move? Not to mention our trip to Europe in the big middle of it all! (Crap, I nearly forgot about that!) There aren't enough hours in the day to keep the house running somewhat smoothly and normally while also preparing for this worldwide change. Physically and emotionally, it'll be a challenge. You'll notice I'm refraining from negative connotations? I'm determined to be positive about this thru the long haul. After all, I'm moving somewhere exciting (lots of people who've been there before us RAVE about it!) and I'm doing this with my best friend and love and my boys by my side!

For now though, if you're friend or family and plan to come over, either excuse the mess or pitch in and help. Imma need a LOT of it. ;)
Posted by featherthumper at 11:03 AM