NOTICE: I've had it with bullies.

Those bigger asswipes who pick on people smaller than them because they think size will protect them, either thru intimidation or sheer force.
Those smaller Napoleon weenies who, like rabid, snarling poodles try to push others around, regardless of size because they have something to prove.

Well, guess what you little pricks? This little mama may be small but dynamite comes in small packages and I WILL NOT let my kids be victims. Yes, I KNOW violence isn't the answer and turning the other cheek is the best thing to do. However, my children shouldn't have to constantly deal with humiliation, fear or kicks to self confidence. They WILL be taught to stand up for themselves. They already stand up for other kids who are bullied but they don't think it's a big deal when others do it to them. I should be proud of that, knowing my boys are being raised well. But a part of me, that Lindsey demon, is growling and snarling herself and I'm about to let her loose.

Earlier today, a kid swatted at my kidlet who's 11, tall and broad for his age. He takes after his dad in more than size: he's also a gentle giant. He champions others and keeps his own hurts to himself. He told the kid, who happened to be smaller, to knock it off. The jerk then fake juked a punch to my son's face then punched him in the stomach. Unprovoked. (If you know my son, you know this is true and not just a mom turning a blind eye. And there were witnesses.) My kidlet didn't hit back but did have the wind knocked out of him and told the principal his side of the story. Little jerk talked to the principal too but didn't get punished. WHAAAA??? 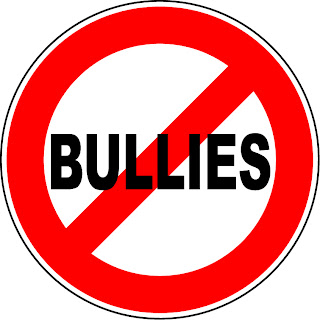 My son had the same problem with a jerk on his baseball team who was favored by the coach as well. That kid spread some terrible and hurtful rumors about the kidlet as well as spit at him and threw baseballs at his face. The kidlet turned away each time, ignoring the taunts but I KNOW it got to him. How do I know? Because another kid told me about how he would hear my kidlet put himself down under his breath during drills, repeating the same hurtful things the jerk had told him. (commence breakage of mommy's heart)

When I confronted the coaches, I was told "boys will be boys" and despite a no tolerance policy, the kid wasn't forced to sit on the bench, as I was told would happen. MY kid sat instead. Of course, I knew where the jerk got his attitude. His mother was a first-class headcase herself and fond of spreading her own brand of meanness. Some people never grow up.

During a big tournament where my kidlet was needed but still sat sideline, I asked the coach again why the other kid was still playing after his actions continued. I was the one ridiculed, (by the coach!) my parenting skills questioned. Mama don't play that! I immediately pulled my son from the team and let it be known loudly neither he NOR his brother would ever play for that coach again. Despite my ex-husband knowing him for many years and being an assistant coach for the same team. The team fell apart after that and good riddance to bad rubbish. Do I regret my actions? NO. Because I stood up for my son when he needed me most.

This next bully better watch it or he'll find himself in a world of hurt. My claws are being sharpened as we speak and the kidlet is about to learn tae kwon do moves from the Major.

God bless the family of a little boy in Stillwater who took his own life in front of students this morning because of bullies. Rest in Peace, Cade.
Posted by featherthumper at 4:40 PM